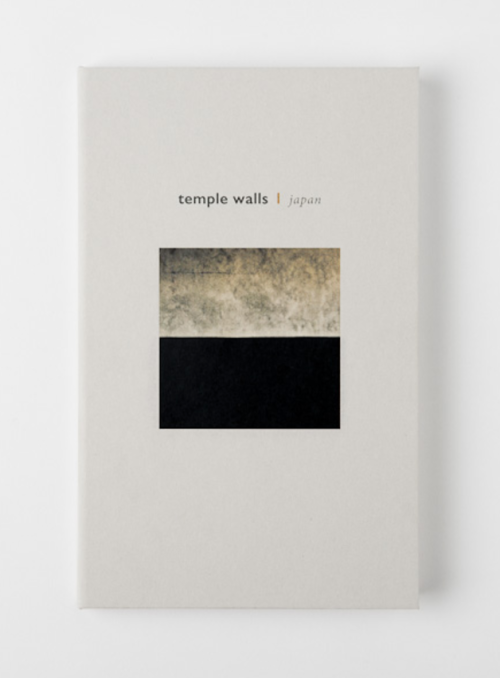 Zen Buddhist practice is sometimes called “wall-gazing” meditation, a reference both to Bodhidharma — the sect’s purported founder — and his nine years meditating while facing a monastery (or, cave) wall, but also to Zen’s eschewing of meditation aids like paintings and statutes. The walls of ancient Zen temples and monasteries have been the companions and unyielding support for the practice of countless practitioners for centuries. This presence, and their non-objective forms (and perhaps these are the same thing), are captured in Paul Rosenblum‘s photographs of temple walls in Japan.

A wall is also symbol of renunciation: the Buddhist meditator has turned away from the world, quite literally.

The images are small squares of wall, thus converting the age and detail of stone, glaze, cracks, woodgrain, weathering into images that call to mind camera-less Polaroids, blurred landscapes, and gesture paintings. However, such imaginations are not Rosenblum’s purpose in creating these images. Rather, “practice is about seeing the mind in all things, even the most commonplace/everyday/simple/mundane. The temples and monasteries that I visited are widely know, even revered by some. For me, my ‘interaction’ with simple, taken for granted things like walls was infused a feeling of honor and respect for the practice that has taken place in them for centuries. I feel each is the body of a Buddha; our practice is what makes it vividly alive in this moment.” (This and other quotations from a personal email from the photographer.)

Rosenblum is a linage holder in the Zen tradition of Dongshan and Dōgen and spends part of each year serving as Vice Abbot of Genrinji, a Zen Temple in the Germany.

These photographs present a radically different view of well-known sites: from the usual architectural, viewer-to-object-oriented, or tourist-friendly Zen gardens, to a quite intimate one that asks for more from the viewer than one-to-one identification of things. It is easier to focus on things planned to be focused on, it is harder to focus on what is more ever-present, sitting firmly in the background (like the mind). The images are”intended as a way to support seeing without thinking predominating.”

One’s attention falls into habit, thus seeing more traditional image of a Buddhist temple tends merely to provoke the mind to recollect the idea of a temple through image-association. These images, radically deconstructed ones of Buddhist temples, urge the eye and mind to work a little harder.

That said, the images have a beauty that one finds absent any heavy mental-lifting. This is to say that they have formal qualities akin to some 20th century western art (whether or not this visual/intellectual impact is akin in some way to Buddhist ways of seeing is an open question). 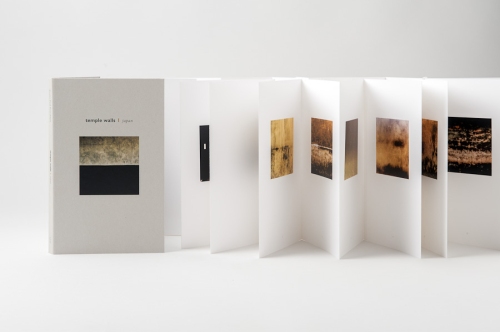 The book itself is a lovely object, an accordion bound, limited edition by Datz Press of Seoul, Korea. The cover stock, inside cover material, paper, and ink all show attention to a somewhat unrefined aesthetic. (The choice to render titles in all lower case does strike me as a touch precious; a minor point in a design that intelligently and sensitively supports the artist’s intention.)

I particularly appreciate this book as it presents new ways of putting images and seeing toward Buddhist practice. Books like this one reveal that there are more ways of using images toward practice than the well-known use of mandalas and thangkas.

This entry was posted in BAN Review, Books, Japan, Photography. Bookmark the permalink.