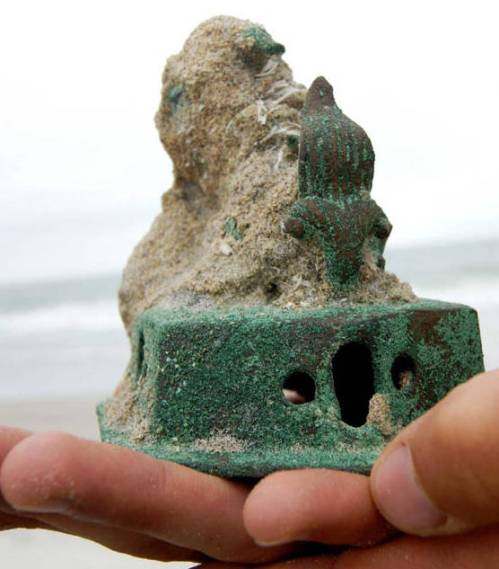 From a blog called The History Blog, And, see also this article from the Latin American Heritage Review. – Buddhist art news

A team of U.S. researchers and marine archaeologists from Mexico’s National Anthropology and History Institute (INAH) found a Chinese bronze sculpture from the 16th century on the Pacific coast of Baja California, a peninsula south of the US state of California. At just under five inches square, the statue is either a censer or a candlestick. It is decorated with a Chinese “Dog of Fo,” a lion figure that protected Buddhist temples.

It was discovered under water using a metal detector two weeks ago as part of the ongoing 12-year Manila Galleon Project which surveys 7 miles along the Baja coast for the remains of Spanish ships known as the Manila Galleons because they carried trade cargo from the Philippines to Acapulco. The trade began in 1565 when Andrés de Urdaneta, explorer, Augustinian friar and the second man to circumnavigate the globe, discovered that if ships departing from Cebu City went north first, the Pacific trade winds would carry them east to the coast of California. END_OF_DOCUMENT_TOKEN_TO_BE_REPLACED