Shripad Naik, India’s minister of state for culture and Sajid Javed, UK’s secretary in the department of culture, media and sport signed the memorandum of understanding in New Delhi on Wednesday. Photo: PTI

Shripad Naik, India’s minister of state for culture and Sajid Javed, UK’s secretary in the department of culture, media and sport signed the memorandum of understanding in New Delhi on Wednesday. Under the partnership, both governments will develop conservation policies, apply conservation techniques and training, digitize and improve records management practices and conserve built heritage, besides forming a collaboration between Indian National Museum and the British Museum, the ministry of culture said in a statement.

The agreement also includes preservation of monuments and Buddhist heritage, infrastructure development at archaeological sites and enhanced people-to-people contact through festivals of India abroad. The alliance also seeks to promote tourism, improve records management in government as well as give a boost to the National Mission on Manuscripts, an autonomous organization under the ministry of culture, which was established in 2003 to survey, locate and conserve Indian manuscripts.

No experience needed, just a willingness to learn!

Buddha’s Word: The Life of Books in Tibet and Beyond 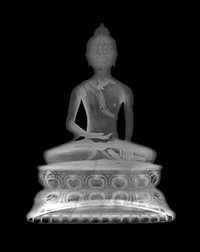 Buddha’s Word is the first museum exhibition of Tibetan material in Cambridge. It is also the first time in the Museum of Archaeology and Anthropology’s history that its Buddhist collections will be showcased in an exhibition.

Developed in partnership with the Mongolia and Inner Asia Research Unit and with support from the Arts and Humanities Research Council and the Frederick Williamson Memorial Fund, Buddha’s Word brings together collections and research from three of the University of Cambridge Museums – the Museum of Archaeology and Anthropology, the Sedgwick Museum of Earth Sciences and the Fitzwilliam Museum – as well as the University Library and Emmanuel and Pembroke Colleges. 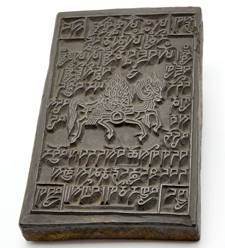 A printing block for prayer flag (lunta, rlung rta), used to print the prayer flag with an image of a wind horse
© Donated by A.F. Schofield, University Librarian

Many of the artefacts, prints and manuscripts in the exhibition have never been on public display before. Exhibits include some of the oldest illuminated Buddhist manuscripts from the first decades of the eleventh century as well as specimens of skilfully illuminated wooden covers; a quartet of scroll paintings brought back from the infamous Younghusband Expedition; and a gift from the 13th Dalai Lama. END_OF_DOCUMENT_TOKEN_TO_BE_REPLACED

Posted on May 18, 2014 by buddhistartnews. | Leave a comment
The new “MA Buddhist Studies” at SOAS has been granted final approval and will start this September.
This new MA will benefit from the school members’ rich combination of expertise in Buddhist traditions and languages. It will be organized around a core course, “Critical Concepts in Buddhist Studies” that will be co-taught by the four key Buddhist scholars in the Department of the Study of Religions, namely Lucia Dolce, Ulrich Pagel, Antonello Palumbo, and  Vincent Tournier.
You can find more information on this programme, its structure and our course offer at: http://www.soas.ac.uk/religions/programmes/ma-buddhist-studies/
The recent appointment of colleagues working on Buddhist Art in Tibet and South East Asia, thanks to the endowment by the Alphawood foundation, will considerably enrich the school’s offer. Indeed, we believe that an auspicious period for Buddhist studies at SOAS is ahead of us.

From the International Dunhuang Project’s blog

The whole text of the earliest dated printed book — the Diamond Sutra — will be on display at the British Library for the first time over a period of eighteen months between March 2014 – August 2015.

Following extensive conservation, the Diamond Sutra scroll currently remains in separate panels giving the unique opportunity to show all the panels in turn (see timetable below). Each panel will be on display for two months in the Sir John Ritblat Gallery at the British Library, open to all and with free admission. Each panel will then be shown in turn, remaining on display for two months. The frontispiece will be shown again for the final display in July and August 2015.

The display also includes a copy of a Chinese almanac printed just a decade later, in AD 877, and two pages from a printed copy of the Heart Sutra in Sanskrit with a phonetic transcription in Chinese, an early example of Korean printing using moveable type and the earliest examples of Japanese printing, the Million Charms of Empress Shotoku. See this earlier post for more information on these.

See the whole of the Diamond Sutra online on the IDP website.

1. The cause of the Dharma assembly
Thus have I heard. At one time the Buddha was in Śrāvastī, residing in the Jeta Grove, in Anāthapiṇḍada’s park, along with a great saṃgha of bhikṣus, twelve hundred and fifty in all. At mealtime, the Bhagavān put on his robe, picked up his bowl, and made his way into the great city of Śrāvastī to beg for food within the city walls. After he had finished begging sequentially from door to door, he returned and ate his meal. Then he put away his robe and bowl, washed his feet, arranged his seat, and sat down.

X-ray of a Buddha kyamuni’s statue in bronze (MAA, 1935.346).Tibet. 14th centuryPurchased by Louis C.G. Clarke.Courtesy of the Hamilton Kerr Institute and the Fitzwilliam Museum, University of Cambridge.

Some of the world’s oldest Buddhist manuscripts dating back to the eleventh century will go on display for the first time in Cambridge.

Historians, anthropologists, linguists, art historians, and scientists have contributed to ‘Buddha’s Word: The Life of Books in Tibet and Beyond’, which will go on show at Cambridge’s Museum of Archaeology and Anthropology from May 28.

Visitors will be able to follow the journey of Buddha’s words in three different spaces within the Li Ka Shing gallery of the museum.

First to greet visitors will be a Himalayan Buddhist Altar which demonstrates an exploration of the text as sacred object, as a relic of the Buddha.

END_OF_DOCUMENT_TOKEN_TO_BE_REPLACED

100 years ago: ‘Wonders of the East’: Stein Exhibition in the British Museum Extension

Stein Photo 28/7(4), Library of the Hungarian Academy of Sciences.

The blog of the International Dunhuang Project describes the exhibition of items (photographs, paintings, books, and others) from Aurel Stein’s early 20th century expeditions to Central Asia. ‘Wonders of the East’: Stein Exhibition in the British Museum Extension, which opened on 7 May 1914, was “designed to show the most valuable results of the second journey of archaeological and geographical investigation carried out by Sir Marc Aurel Stein, K.C.I.E, in Chinese Turkestan and the adjoining western border of China, under the joint auspices of the Government of India and the Trustees of the British Museum.”

Warning: graphic images after the jump.

“The worst one I came across was a body, found in the basement of a Berlin building at 5 o’clock in the morning, wrapped in a blanket which was leaking out like a sponge.

“The smell was really bad.”

This was the stomach-churning response 50-year-old Buddhist and Manchester Metropolitan University lecturer Sue Fox gave when asked about the worst corpse encounter she experienced a few years ago.

But this isn’t the only meeting mum-of-one Sue has had with the dead.

The media lecturer gained unprecedented access to Manchester hospital autopsies, mortuaries and crematoria over the course of four years to take haunting ‘taboo’ pictures of the dead for her book Post Mortem. END_OF_DOCUMENT_TOKEN_TO_BE_REPLACED

Aurel Stein: A hundred years on

Tibetan skeletal dancers make no bones about it

SKELETAL dancers have helped bring a spectacular end to a week’s residency in Oxford for a group of exiled Tibetan Buddhist monks.

The monks, who are from the Tashi Lhunpo Monastery in Tibet, have been showing off their culture and traditions at the Pitt Rivers Museum since Tuesday.

On Saturday night, they performed a dance at St John the Evangelist Church in Iffley Road, Oxford. END_OF_DOCUMENT_TOKEN_TO_BE_REPLACED