There are a number of important Buddhist archeological sites located in what is present-day Bangladesh. Historically, Bangladesh was once part of greater India and known as East Bengal. To understand the significance of these sites, one must consider the overall context of Indian archeology and the development of Buddhism in certain locations. This area (of Bangladesh) refers to Paharpur in Naogaon, Mahasthangarh in Bagura, Mainamati in Comilla  and Bikrampur in Dhaka district. Each site in these areas has unique qualities as part of history. Some archaeological sites in Bangladesh are important for both Hindu and Buddhist investigation because religious sculptures of each can be found.

Historically, the Pala Dynasty, a series of Buddhist rulers spanning 7th – 12th Centuries, dominated Bengal. Under their patronage many world famous monasteries were built, the remains of which are revealed in the archaeological sites in Bangladesh. Due to political exclusion, when Hindu and Muslim Rulers dominated Bengal, many important monasteries and stupas were rebuilt and replaced by the later construction. As a result, what we see today is not necessarily the original Buddhist construction, but a combination of historical changes. END_OF_DOCUMENT_TOKEN_TO_BE_REPLACED

Existence of any prehistoric phase in the deltaic land of Bangladesh was not found by archaeologists for a long time. It is only very recently that traces of a fossil-wood tool-making tradition have been unearthed. Early archaeological activities in areas comprising Bangladesh were mainly concerned with remains of ‘early historic’ and ‘early medieval’ period. Of the Hindu-Buddhist archaeological sites in Bangladesh, the most important are Paharpur in Naogaon, Mahasthangarh in Bogra, and Mainamati in Comilla. Sir Alexander Cunningham’s archaeological expeditions in areas now forming Bangladesh was carried out in 1879-80 and included Mahasthan and Paharpur.

The recent discovery of Buddhist temples in two districts are not less valuable compared to Paharpur and Mahasthan. Archaeology Department of Jahangirnagar University (JU) discovered a temple and a brick-built building at Palsha union under Ghoraghat upazila in Dinajpur district recently. The excavation work is going on. This discovery was made after a survey in August 2011. Again, after three years of excavation, archaeologists unearthed an ancient Buddhist ‘Vihara’ (monastery) earlier in Bikrampur region of the Munshiganj district for the first time while carrying out excavation work at Raghurampur village. The discovery was made during an excavation conducted jointly by the Agrasar Bikrampur Foundation, a local socio-cultural organisation, and the Archaeology Department of the JU. The Ministry of Cultural Affairs financed the project. END_OF_DOCUMENT_TOKEN_TO_BE_REPLACED

Archaeologists on Saturday unearthed an ancient Buddhist ‘Vihara’ (monastery) in Bikrampur region of the district for the first time while carrying out excavation work at Raghurampur village.

The discovery was made during an excavation conducted jointly by Agrasar Bikrampur Foundation, a local socio-cultural organisation, and Archaeology Department of Jahangirnagar University (JU).

The Ministry of Cultural Affairs financed the project.  The excavation is the result of four years of hectic effort of the team. END_OF_DOCUMENT_TOKEN_TO_BE_REPLACED

Army soldiers supervise reconstruction of Buddhist temples destroyed in September 29th attack in southeastern Ramu subdistrict. The government has undertaken a project to rebuild the temples and homes and the work has begun in earnest a month after the attack perpetrated by suspected Muslim radicals. [Shoiab Sayeed/Khabar]

In an effort to heal the wounds inflicted by the recent violence on minority Buddhist community in southeastern Ramu, authorities have undertaken a massive rebuilding effort.

Only six weeks ago, southeastern Ramu was in smouldering ruins. Mobs of radical Islamists had terrorised the Buddhist community in this subdistrict of Cox’s Bazar, smashing keepsakes and torching homes and temples.

Now the government has begun repairing the damage, in an effort to heal the wounds and to demonstrate that the majority of Muslims embrace tolerance and do not condone religious hatred. The swift response has drawn praise. 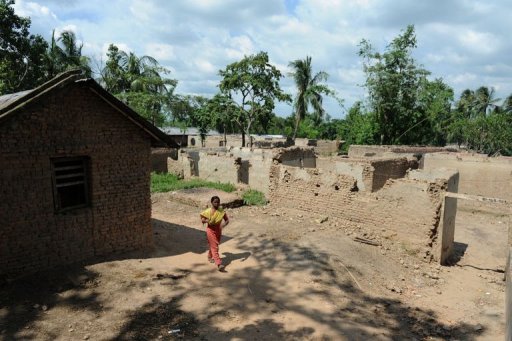 Bangladeshi village Mahasthangarh sits on what was once the ancient city of Pundranagar, built 2,500 years ago and. The stripping away of sections of the ruins by residential encroachment and the casual looting of artifacts has threatened to erase the remains of a city that stood for millennia.

END_OF_DOCUMENT_TOKEN_TO_BE_REPLACED

A site thought to contain a 'Buddhist Vihara' (monastery) at Raghurampur area in Munshiganj sadar upazila. Jahangirnagar University archaeological department in cooperation with Agrosor Bikrampur discovered the site after days of excavation and announced the finding yesterday. Photo: Courtesy

Archaeological researchers yesterday announced unearthing a wall thought to be of a “Buddhist Vihara” (a monastery constructed during Buddhist rule from approximately the 8th to 11th century) in Raghurampur area in sadar upazila of Munshiganj.

“We found a wall, 2.5 meters in width and around 3 feet below the surface. We think it is part of a Buddhist Vihara here,” said Prof Dr Sufi Mustafizur Rahman of archeology department of Jahangirnagar University. END_OF_DOCUMENT_TOKEN_TO_BE_REPLACED

from The Hindu, SHYAMHARI CHAKRA

A Muslim Manipuri dancer from Bangladesh, Warda Rihab is quite fond of portraying the Hindu characters of Lord Siva and Radha. She gave ample evidence of this as she literally danced into the hearts of her audienceduring her last performance in Bhubaneswar.

“Dance is my religion”, she says and adds, “I wish to be remembered as an ambassador of Indian arts in Bangladesh and vice versa. For me, both are my beloved lands, where I feel at home”. Manipuri dance has its roots in religion; it revolves around the Vaishnavite philosophy. But it has nothing to do with the religion of the practitioner, explains Warda Rihab who studied this dance form with a scholarship offered by the Indian Council for Cultural Relations (ICCR). END_OF_DOCUMENT_TOKEN_TO_BE_REPLACED

Dr. Shahnaj Husne Jahan, Archaeologist and ULAB Associate Professor spoke in Bangkok on “A Journey to the Buddhist Archaeological Sites in Bangladesh.” The lecture was held at SEAMEO-SPAFA, Bangkok on 25 February 2011.

A Journey to the Buddhist Archaeological Sites in Bangladesh

Buddhism as a religion grew out of the teachings of an historic individual, Siddhartha Gautama, who lived in the sixth century BCE in the north-eastern part of South Asia. Bangladesh possesses a unique place in the history of Buddhism for two reasons: (i) it was the last stronghold of Buddhism where it survived as a socio-cultural force until the twelfth century CE, despite its disappearance from other parts of South Asia; and (ii) Bangladesh was the home of Tantric Buddhism. END_OF_DOCUMENT_TOKEN_TO_BE_REPLACED

A brief history of Buddhism in Bangladesh

For much of its history, the country that we today as Bangladesh has been a part of a greater India and was known only as Bengal: what happened elsewhere on the subcontinent in the twentieth century had a serious effect on Bengal. The history of the modern state of Bangladesh has been short.

Buddhist monk in Bangladesh. The borders of present-day Bangladesh were established with the partition of Bengal and India in 1947, when the region became East Pakistan, part of the newly formed nation of Pakistan. END_OF_DOCUMENT_TOKEN_TO_BE_REPLACED

In Wari-Bateshwar of Narsingdi, archaeologists have recently excavated a 1,400-year-old Lotus Temple, the first proof of flourishing of Buddhism in the region.

The brick-built temple constructed around seventh or eighth century–as evidenced by its structure and the size and shapes of the bricks and other finds excavated at Mandirvita at Dhupirtek of Shibpur in the district–suggests existence of a Buddha Vihara there, they said.

“This is the first ever proof that Buddhism flourished and was practised in Wari-Bateshwar region of Madhupur tract,” said Prof Sufi Mostafizur Rahman, who is leading the excavation team comprised of researchers from archaeological research centre Oitihya Onneswan, teachers and students of archaeology department of Jahangirnagar University.

According to a copper plaque found in 1885 at Ashrafpur, 7km from Mandirvita, King Devakhadga had donated land to four Viharas and Viharikas in the area. END_OF_DOCUMENT_TOKEN_TO_BE_REPLACED