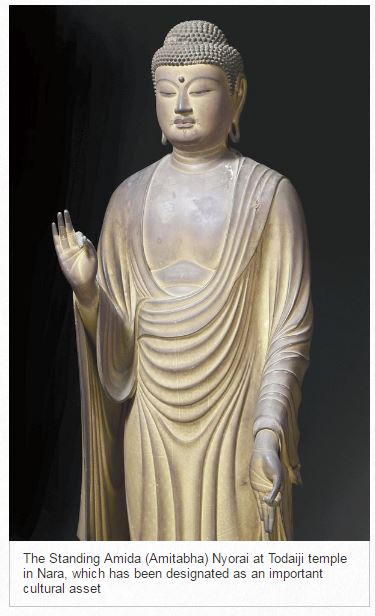 NARA — Kaikei, one of the nation’s representative sculptors of Buddhist statues from the Kamakura period (late 12th century to early 14th century), developed a sophisticated form of sculpting that was followed by artists of later generations. An ongoing exhibition in Nara presents the various attractive aspects of Kaikei’s sculptures, helping visitors see why Japanese have been fascinated by the master’s works.

Kaikei, whose date of birth and death are unknown, has been seen as an equal to Unkei (d. 1223), whose father is said to have served as the young Kaikei’s teacher.

Currently being held at the Nara National Museum through June 4, “The Buddhist Master Sculptor Kaikei: Timeless Beauty from the Kamakura Period” is an unprecedented exhibition as the items on show include 37 works proven to have been created by Kaikei based on his signatures on the pieces or other clues. This accounts for 80 percent of such works definitely attributed to Kaikei today, both at home and abroad.

Kaikei carved out Buddhist images as a serious devotee of Amida (Amitabha), which can best be indicated by the Standing Amida Nyorai at Todaiji temple in Nara.

For some works, Kaikei used a signature that included Amida, as on the Seated Miroku (Maitreya) Bosatsu at Daigoji temple in Kyoto. The statue, on view from April 25, is described as the best work of the sculptor’s early years.

The signature can also be found on the powerfully carved, impressive Komokuten (Virupaksa) from the Four Guardian Kings at Kongobuji temple in Wakayama Prefecture.

Among Buddhist sculptors up through the 16th century, Kaikei left the largest number of works in existence. While Unkei was an innovative artist, Kaikei created his works in an orthodox fashion.

Kaikei employed this approach “because it was supported by many people as describing the ideal figure for Buddhist images,” said Ryusuke Yamaguchi, a researcher at the national museum. 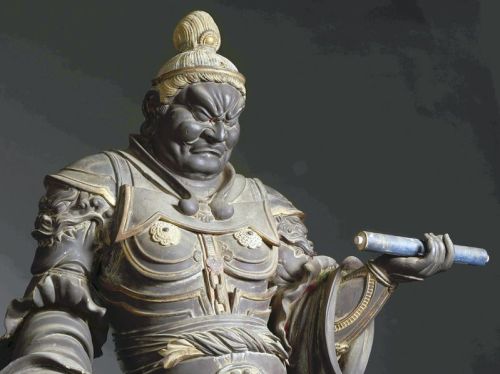 The Komokuten (Virupaksa) from the Four Guardian Kings, an important cultural asset at Kongobuji temple in Wakayama Prefecture

The generous support Kaikei enjoyed can be indicated by the Seated Hachiman in the Guise of a Monk, a national treasure at Todaiji. The inside of the wooden sculpture bears the names written in ink of many Buddhist followers with strong ties to the temple.

The Standing Shaka (Sakyamuni) Nyorai is believed to have been made during the later stages of Kaikei’s life. Owned by the Kimbell Art Museum in Fort Worth, Texas, the work shows his seasoned technical ability and deeper devotion to the religion.

Many of the items on display were created using a technique called kirikane, in which leaves of gold and other precious metals are cut into small pieces or stripes before being affixed to the surface of sculptures to create patterns. Patterns of hexagons and hemp leaves made with this kirikane technique can be found on the clothing parts of some of Kaikei’s Buddha statues.

In a gilding technique called kindei, gold leaf powder is mixed with gelatin before being applied on sculptures. The Seated Miroku Bosatsu created in 1192 is said to be the earliest surviving work made with this kindei technique.

The Standing Shaka (Sakyamuni) Nyorai at the Kimbell Art Museum in Fort Worth, Texas

The Standing Amida Nyorai and Standing Shaka Nyorai look particularly gorgeous because they are decorated with the latest approach of the time — applying patterns made with the kirikane technique onto a kindei gilded surface.

“The Buddhist Master Sculptor Kaikei: Timeless Beauty from the Kamakura Period” continues at the Nara National Museum in Nara through June 4. Closed on Mondays except May 1. Visit: www.narahaku.go.jp/english/

The Japan News will offer five pairs of free tickets for the exhibition to our readers. Please check our Giveaways column in the April 22 issue.

This entry was posted in Exhibitions, Japan. Bookmark the permalink.