A photobook in search of context and sequence: The Monks Of Rural Thailand

While American photographer Lee Cracker’s images have appeared in mass circulation publications, he has taken lately to self-publishing a number of Thai-based projects, including books on the 2014 coup and a collection of Bangkok street images.  If these are in any way similar to this volume on Buddhist monastics, they would benefit greatly from an editor familiar with the topic, and more fundamentally with visual narration.

The electronic version of The Monks of Rural Thailand is a 71-page pdf containing several lovely images of Thai bhikkhus engaged in typical monastic behavior. The images are accompanied by a brief description of Thai monasticism and a handful of Buddha quotes on the nature of suffering and liberation.

One of the impressive images featured in The Monks of Rural Thailand.

But the story, such as there is, feels incomplete and lacking direction.  Most of the images appear to have been taken at public events.  There are few private moments, such as monks in their quarters, or monks studying, or monks meditating.  But even if there were, it might be difficult for viewers unfamiliar with their world to understand what they are seeing.  Perhaps Cracker prefers a visual presentation that doesn’t require text, but I suppose the average viewer coming to this book would like to know what is pictured.  As someone who has studied Buddhism formally, as well as practiced among Asian Buddhists, I have some familiarity with Buddhist monastics, but even so a few of the images in this collection left me wondering exactly what was happening.  Cracker doesn’t even tell us in what part of Thailand these photos were taken.  In addition, sequencing is opaque.  There appear to be a set number of activities – praying, walking alms rounds, receiving donations, and taking part in ordination ceremonies – but the images are not suitably grouped and some seem to have no particular value in telling a story.

Cracker is obviously an able photographer, as a look at his website will clearly demonstrate.  A revised and expanded version of his Thai monastic project would be a welcome addition to his body of published work.

Who is this person, why is he being carried, by whom? Why does the lintel need to be touched?

Beautiful processing but to what effect? What is happening here? 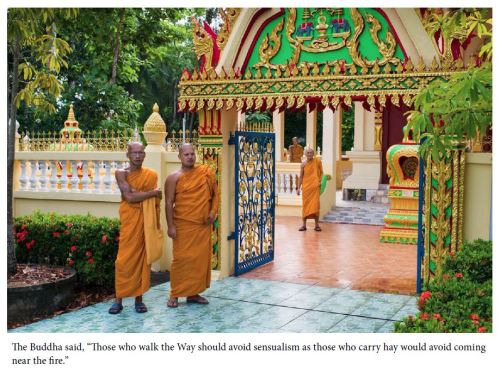 What is the purpose of this photo? What story does it tell? How does the quote enliven the image?

A profile of Lee Cracker from the Bangkok Post:
http://www.bangkokpost.com/learning/learning-together/413931/monks-in-rural-thailand

Buy the electronic version of The Monks of Rural Thailand:
https://gumroad.com/l/monks

This entry was posted in Books, Photography, Review, Thangka. Bookmark the permalink.