One year on, Bangladesh restores Buddhist temples destroyed in riots

A new Buddha figure graces a rebuilt temple at Ramu. More than 50 idols were imported from Myanmar and Thailand. Photo: Xinhua

A year ago, tensions were on a razor’s edge in southeast Bangladesh, as Muslim mobs looted and vandalised 19 Buddhist temples and monasteries.

But the pogrom, which also saw scores of Buddhist villages set on fire in the Cox’s Bazar area, has inspired religious reconciliation, all too rare in South Asia.

The government of the Muslim-majority nation renovated and reconstructed all the temples and monasteries, drawing praise from across the region. The project was completed last month.

Nilutpal Barua, joint secretary of the Central Buddhist Unity and Welfare Society in the sub-district of Ramu – scene of the worst attacks on September 29 and 30 last year – said community leaders were grateful.

“Many Buddhists said after the attack that the government would not bother to compensate the community for the riot anyway and that Bangladesh was no longer safe for Buddhists,” the college lecturer said. “But the government acted swiftly with sincerity and now community members [are] happily visiting the temples and monasteries again.

“Many Buddhist artefacts of historical importance were lost … yet we are happy with the government because it has done much to heal our wounds.”

The attacks occurred after a young Bengali Buddhist reportedly posted a photo on Facebook deemed offensive to Islam. That was used by the mobs to justify the torching of the Buddhist villages in Cox’s Bazar. Although the riots were soon brought under control, hundreds of Buddhist homes were destroyed, in addition to Buddhist temples and monasteries. 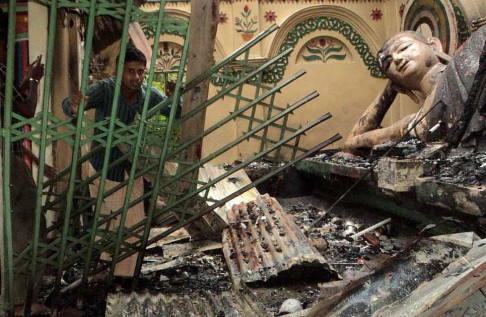 The burned temple of Shima Bihar at Ramu in December. Photo: AFP

Bangladesh’s Buddhists make up less than 1 per cent of the country’s 155 million people.

The Engineer Construction Battalion of the Bangladesh Army was pressed into action, rebuilding 14 temples and monasteries and repairing five, at a cost of 200 million taka (HK$19.65 million).

More than 50 Buddhist idols were imported from Myanmar and Thailand.

On September 3, Hasina inaugurated the religious sites and handed them over to the Buddhist community in the presence of more than a dozen foreign envoys. She said her government was determined to protect the rights of people of all faiths.

“The attack … brought shame to the entire nation. We hope the bringing of the temples and monasteries back to life will help heal the wounds.”

Karunashri Thera, head monk of the reconstructed Bimukti Bidarshan Bhabna Kendra temple, said the riot had “devastated” a Buddhist community that he said had lived in peace alongside Muslims for centuries.

“Now the community is largely happy to get back the temples and monasteries,” he said.

The restoration work has also been praised by many Muslim community leaders.

“Given this scenario of attacks on minorities, the Bangladesh government has performed the moral duty of restoring and rebuilding the Buddhist structures,” said the North Eastern Hill University professor.

“This puts balm on the sense of injury of the Buddhists and gives them a semblance of dignity and equal rights to live as minorities in a Muslim-dominated country.”

This article appeared in the South China Morning Post print edition as Temples restored, along with trust
[link]

This entry was posted in Bangladesh. Bookmark the permalink.