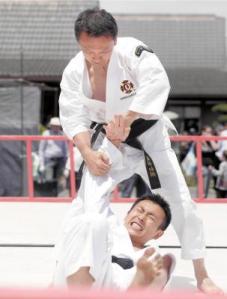 For Jimmy Eitoku, the Salinas Buddhist Temple’s annual Obon Festival is a time to share his appreciation of the Japanese martial art of kendo, and the man who introduced him to it and whose legacy is reflected in his own life.

On Sunday, as he has for years, the Salinas Kendo Dojo sensei and his students conducted a demonstration of the martial art, which is descended from traditional swordsmanship, for the thousands who attended the 58th annual event marking the summer season when Buddhists honor their departed ancestors.

Eitoku and his students took to the festival’s main stage before an appreciative crowd to show off their acumen in kendo, which employs bamboo swords (shinai) and protective armor (bogu), including masks.

The 51-year-old Eitoku, the Salinas kendo dojo’s first student in 1970, said his dedication to the local kendo program is a way to honor the dojo’s founder and first sensei Takuma Bunden.

Growing up on his parents’ nursery — Sam’s Greenhouse — Eitoku admitted he didn’t want to attend the dojo to learn kendo at first, but his parents insisted and the rest is history.

Eitoku, who ended up taking over the dojo from Bunden and now has sons who practice the martial art, said the sensei’s legacy is “reflected in the accomplishments and success” of the program, including participation at the highest levels of the sport.

In his more than four decades in the sport, Eitoku has competed at the national level of the sport every year except for one, and just won the Northern California senior (50-and-over) division title last year.

But perhaps his greatest accomplishment has been in passing along the lessons he learned from his sensei to his students.

“I try to carry on what he taught me,” Eitoku said. “Tough training but with a soft side. You should work hard but also be a pleasant person to be around.”

Eitoku, a pharmacist who is poised to become president of the Salinas temple next year, said the festival is part of that tribute to those who have gone before.

“Obon is about remembering family and friends who have passed on,” he said. “They are so much of who we are today.”

Temple board member Larry Hirahara said the festival, a massive undertaking that requires six months of preparation, is “as big as Christmas” in the Buddhist community. The festival, said Hirahara, is a way to introduce the general public to “our food and culture” and an opportunity for public outreach to the community. It’s also the 250-member temple’s largest fundraiser, Hirahara said.

Crowds packed the main hall to sample a variety of foods ranging from Udon noodles, tempura shrimp and vegetables, and sushi to pastries.

This was the second year that the Rev. Orai Fujikawa presided over the festival following three years without a minister.

Fujikawa, a native of Hiroshima who came to Salinas in January last year from Vancouver, B.C., said the local festivities stand in contrast to those of his previous temple, which he described as “very simple.” There, he said, the temple follows the traditional Obon religious service with a dance.

Fujikawa said Obon is a time of “reunion” of family and friends, the living and the dead, and a time of “discovering myself.”

“I am a product of all the past, of my ancestors,” he said. “This is a time to honor them.”

In addition to Salinas, temples in Seaside and Watsonville also host Obon festivals, albeit on different weekends, and Hirahara said members of the three temples often attend the other festivals as a show of support.

This entry was posted in Dance, Japan, United States. Bookmark the permalink.