REVIEW: A Shower of Jewels: Deities of Wealth at Oglethorpe University

Posted on November 2, 2008 by buddhistartnews | 2 Comments

A Shower of Jewels: Deities of Wealth at Oglethorpe University
November 2008
Review and photographs by
Jonathan Ciliberto
for Buddhist Art News

Despite the increased interest in Tibetan Buddhism since the general dispersion of Tibetan culture following the Chinese takeover of the country in 1950, exhibitions which explore the ritual nature of Buddhist art in the Himalayas are scarcely found in the West. This is largely owing to the esoteric tradition which surrounds (and creates) such artworks. One of the largest collections of Tibetan Buddhist art outside of the native region is held by the Rubin Museum of Art (RMA) in New York, and thus one expects a great opportunity for Atlantans to learn more about this art-culture through the six exhibitions arranged between the RMA and Atlanta’s Oglethorpe University Museum  of Art.

A Shower of Jewels: Deities of Wealth, the second exhibition in this series, runs through 7 December 2008.

Although seemingly antithetical to Buddhism’s emphasis on non-materialism, a lack of money (or the things it can buy) is just such an obstacle. [3] A number of deities are propitiated particularly for the acquisition (or protection) of wealth. Stories from sacred literature describe the result of proper veneration of these “Wealth Deities” (Tibetan: nor lha), in which both monks and laity receive showers of gems, pearls, and other bounty from the proper veneration of deities. However, it must be borne in mind that the acquisition of such wealth depends strictly upon the motivation of the practioner. “If the motivation is pure, such as seeking wealth to relieve the suffering of others, this fits well with compassionate principles of the dharma and hence is more likely to succeed.” [4]

Deities of wealth are perhaps best understood in the same terms Rob Linrothe uses to describe wrathful deities: as removers of obstacles. “As embodiments, or personifications, of the destruction of obstacles, the appearances of wrathful deities give us confidence in their abilities to master that which is malignant in human life: illness, misfortune, ingrained destructive pattens of behaviour, the capacity to lust, hate, and envy, and the ability to act out of selfishness and ignorance, faculties with which we are all endowed.” [5] Wealth deities in this sense represent a form of upaya (skillful means) for Buddhist practice.

The rituals associated with gods of wealth may also be thought of as a form of skillful means for eliminating, or at least reducing, attachment to material concerns. By projecting these matters onto a potent deity, the individual turns these concerns over to a higher agency. So, mental activity related to material things, by its nature contingent, is removed from the mind of the practitioner and becomes an objectified obstacle which may be overcome through the intercession of a particular deity. [6]

In an apocryphal but instructive story, the layman Sucandra asks the Buddha to for “a method whereby he could amass stores of grain, gold, silver, and gems in order to support his family and servants and engage in philanthropy. Shakyamuni disclosed that he had leaned a mantra for precisely this purpose.” [7]

A more likely explanation for the origination of Wealth Deities is found in the readiness of Buddhism to incorporate local rituals and deities, particularly as it spread to new regions. This assimilation, combined with Tibet’s position at the center of a vast crossroads (between India, Persia, Central Asia and China), provides a useful lens for understanding the appearance of wealth deities in Tibetan Buddhism. Several local religions existed in Tibet prior to the introduction of Buddhism, all associated with magical and ritual acts directed toward deities. “Within Indian Mahayana Buddhism speculative thought and ritual had already become indissolubly linked, and thus it came about that the ritual side of Mahayana Buddhism began to prevail in Tibet, thanks to the tendencies to magic already present within Indian ritual.” [8]

The selection of 12 pieces from the RMA (9 paintings and 3 sculptures) focuses on “the five most prominent figures within the vast pantheon of Buddhist deities devoted to protecting and providing wealth” (exhibition signage): Mahakala, Vaisravana, Jambhala, Vasudhara, and Ganapati. Amongst these we find: two clear incorporations of Indian deities; the personal deity of Genghis Khan; one whose worship was closely associated with the Khotanese royal family; one who in her six-armed variety is almost exclusively seen in Nepal. Thus one sees in the significant wealth deities of Tibet a wealth of connections to international contact between that country and her near neighbors.

A small statue of Mahakala Shadbhuja (six-hands) opens the exhibition, the protector deity figured in copper allow with pigments, legs in a wide stance, with two arms held in front, the right holding a vajra tipped chopper and the left a skullcap. The other two pairs of arms spread out to the flaming halo, with hands forming mudras and holding a hand drum, a small rosary of skulls, and other ritual implements. Mahakala treads upon the elephant-headed Hindu god Ganesha (Ganapati in the Buddhist pantheon), an obstacle of material cupidity. The stance of the main figure’s body, slightly upraised by a right foot pressing on the neck of Ganesha, combined with the rotational effect presented by the outflung arms and halo, put Mahakala in active motion cutting through mental obstacles and inspiring confidence. [9]

A second image of the six-armed form of Mahakala appears in a nineteenth century painting from Eastern Tibet, again treading upon Ganapati (here holding a radish, his favorite food) and with similar iconography. This trampling of a Hindu god is a didactic representation of the superiority of Buddhism (material austerity) over Hinduism (material cupidity). The mountains in the background the the left and right of Mahakala appear unfinished, rendered in simple ink on cotton.

Ganapati appears as the primary subject in another painting, here himself the “remover of obstacles” as he is known in India. [10] The flowing treatment centers on a red form of the deity, who holds a monkey, the latter feeding him a radish and bearing a wish-fulfilling gem ” the painting overflows with gems of all colors. Two forms of Guru Rimpoche Padmasambhava appear at the top of the painting. Lush flowers bloom to either side of Ganapati. Two small sculptures of Yellow and Black Jambhala (in Tibetan pronunciation Dzambala or Zambala) show this wealth deity in both his round- bellied, jolly form, and in a rare tantric form, with consort. [11]

Vaisravana, the Lord of the North, Lokapala, and chief of the yaksas are presented in paintings: he rides a Tibetan snow lion, is garbed in armor or regal attire in his blue form, commands his squadron of horseman, and carries in his right hand a victory banner, and in his left clutches his key symbol: a mongoose which at the squeeze of his hand spits out a stream of precious jewels. As with Ganapati trampelled by Mahakala, this iconography indicates the dominance of Buddhism over Hinduism, with the mongoose sent beneath the earth to conquer the naga (snake) king and retrieve earthly treasures. Vaisravana, the transformed Indian god Kuvera (also Kubera), is “protector of the state par excellence” [12] and also called Dhanada, distributor of wealth” in India. [13] The military trappings of Vaisravana seem to originate in his veneration in Central Asian, as evidenced by his eight horseman, “dressed in Mongolian costumes.” [14]

The final piece in A Shower of Jewels is a Mandala of Vasudhara, the goddess of wealth and “considered to be the ahakti of Jambhala.” [15] This painting offers evidence of the actual worship of this deity, from scenes of monks and laypersons in ritual practice, to an image of the old man of longevity, a symbol of long life and prosperity.

With a superb selection of paintings and sculpture on the Tibetan wealth deities, this second offering of sacred art from the Rubin Museum of Art gives local Atlantans a chance to see a specific category of ritual artwork of Himalayan Buddhism. The one flaw in this exhibition is the paltry accompanying materials for study and increased understanding. It is difficult to see why the RMA or Oglethorpe did not provide even more expansive information on each piece in a binder (as given in the initial exhibition in this series), especially since such is available from the excellent Himalayan Art Resources website (links are provided for each piece in the Catalogue below), a resource of the Shelley and Donald Rubin Foundation. Putting aside this small failing, I commend the fine partnership of the RMA and Oglethorpe University and look forward to the future exhibitions in this series. 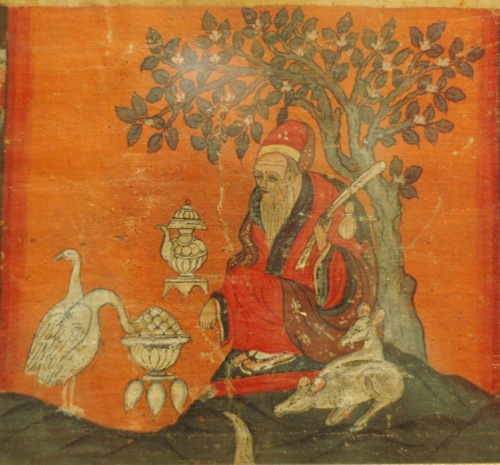 iii Notes:
1 “The entire monastic life is ruled by the regularly repeating cycle of liturgical assemblies and dispersals (cho ga). Cho ga means “liturgy”. It encompasses many types and means for the attainment of the desired goal. According to the Tantric system, for example, cho ga is the meditation in which one’s guardian diety (yi dam) is visualized before one.” – Tucci, Religions of Tibet, p. 11.

3 “Once the Buddha was asked a question: (Jata Sutta)
“The inner tangle and the outer tangle ”
This world is entangled in a tangle.
Who succeeds in disentangling
this tangle.”
“The Buddhist Way to Economic Stability,” in Gems of Buddhist Wisdom, p. 409-10.

6 “These deities of prosperity, unlike the Western god Mammon, are considered benevolent, and are helpful to spiritual people by supporting the educational purpose of life in the Buddhist perspective.” Rhie, Thurman, Worlds of Transformation, p. 228, 232. The tradition of monks propitiating Wealth Deities for the benifit of the lay community continues into the Internet age (Prayer 102: Norlha Yang Kyab (Prayer to the Deities of Wealth and Good Fortune)): http://www.mahasiddha.org/prayers/index.html

8 Tucci, p. 8. “[…] it is certain that the Buddhist communities were forced to adopt some of the ancient rituals, which were idigenous and deep-rooted, and therefore ineradicable.”

9 Mahākāla (mGon po), “The Great Black One,” is also “the main protector deity of Mongolia, given such distinction by the Third Dalai Lama” in the seventeenth century. (Rhie, Thurman, Wisdom & Compassion, p. 294.)

10 In another thanka, Mahākāla “stands erect on the prostrate figure of Ganesa […] The Buddhists’ ambivalent attitude toward this god is evident from the fact that in the lower left-hand corner of the thanka a monk is seen worshipping another image of Ganesa.” Pal, Art of Tibet, p. 145.

11 The distinction between Tibetan deities is not always clear, nor need it be; thus Frédéric refers to Jambhala as “a Nepalese form of Vaisravana,” and Fisher writes: “Jambhala is another of the deities borrowed from the Hindu pantheon, in this case from Kubera, god of wealth” (p 118). Similarly, Pal writing on a scene of worship in a 15th c. painting from Guge in Western Tibet, refers to “Jambhala, also called Kubera, the dispenser of wealth.” (Pal, Art of Tibet, p. 142) Kreijger refers to Jambhala as “an earlier name for Vaisravana” (Tibetan Paintings).

14 Pal, Art of Tibet, p. 151; “The iconography of the lokapalas reached its definitive state in Central Asia, where mural paintings of Vaisravana figure among the made in the Yulin caves during the ninth century Tibetan occupation of the Dunhuang region.” Heller, Tibetan Art, p. 148. See also Rhie, Thurman, Wisdom & Compassion, p. 161.

Bhattacharyya, B. (1968). The Indian Buddhist iconography, mainly based on the Sādhanamālā and cognate tāntric texts of rituals. Calcutta: Firma K.L. Mukhopadhyay.

Eliade, M. (1986). A history of religious ideas : volume three: From Muhammad to the Age of Reform. Chicago: University of Chicage Press.

Getty, A. (1988). The gods of northern Buddhism: Their history and iconography. New York: Dover Publications.

Klimburg-Salter, D. E. (1982). The silk route and the diamond path: Esoteric Buddhist art on the trans-Himalayan trade routes. Los Angeles, Calif: Published under the sponsorship of the UCLA Art Council.

Nebesky-Wojkowitz, R. d. (1956). Oracles and demons of Tibet; The cult and iconography of the Tibetan protective deities. Gravenhage: Mouton.

This entry was posted in BAN Review, Exhibitions, Tibet. Bookmark the permalink.

2 responses to “REVIEW: A Shower of Jewels: Deities of Wealth at Oglethorpe University”